1.  A six-year-old girl wrote a letter to officials in Los Angeles County, asking if she could keep a unicorn in her backyard if she ever finds one . . . and they said YES. 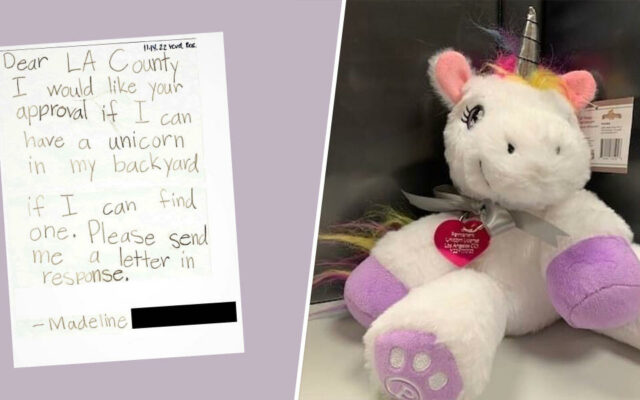 They sent her a “unicorn license” certificate with her name on it, signed by the animal control director.  They also sent a unicorn stuffed animal with a “permanent unicorn license” tag.  (Here’s their Facebook post.)

They did give her a few rules though:  If she ever finds a unicorn, she has to comply with all caretaking regulations . . . give it “access to sunlight, moonbeams, and rainbows” . . . and polish its horn at least once a month with a soft cloth.

2.  A photographer in Austin thought she got hired to shoot a couple’s proposal video at the edge of a cliff.  But then her boyfriend showed up with her two kids, and HE proposed.  Her best friend helped pull it off, and it’s all on video.

3.  A 90-year-old woman just graduated from Northern Illinois University yesterday, 71 YEARS after she enrolled.  She did three-and-a-half years studying home economics, but quit when she met her future husband.  She had to learn to use a computer to do virtual classes this time, but made it happen.