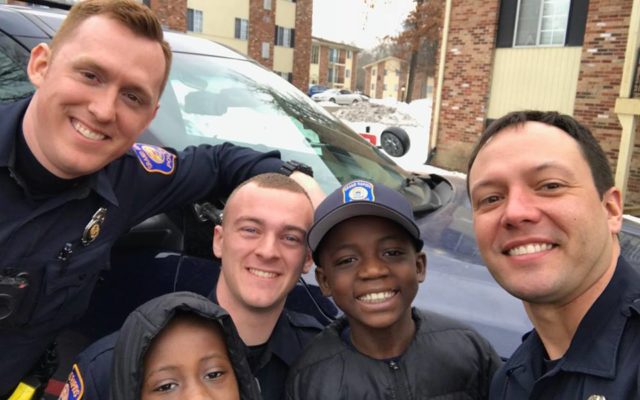 A cop in Grand Rapids, Michigan named Austin Lynema recently gave a nine-year-old kid a ride to school after he missed his bus.

The kid’s name is Thomas Daniel.  And Austin saw him running after his bus CRYING, because he’d never missed a day of school before.

It also happened to be Thomas’s BIRTHDAY.  And on their way to the school, he told Austin he was worried no one would show up to his party.  Turns out he gets bullied a lot.  And unfortunately he was right.

None of his friends from school showed up for his party that night.  But AUSTIN did, and brought a few other cops with him.  So Thomas still had a good time.

And it didn’t end there.  Because Austin and the other cops decided to throw him a SECOND party the next day and gave him a bunch of cool stuff.

He got toys . . . shirts and hats with the police department logo on them . . . a bunch of Krispy Kreme donuts that spelled out “Happy Birthday” . . . and Austin even brought along a QUARTET to sing to him.

Thomas says he’ll never forget it for the rest of his life.  And he called Austin “the coolest guy [he’s] ever met.”

(Here are some photos.)

Is there a Good News Story we should know about and share with everyone? We'd love to hear it! Just give us some details and a way to contact you and we'll feature it as one of our Good News stories of the day.
Trending