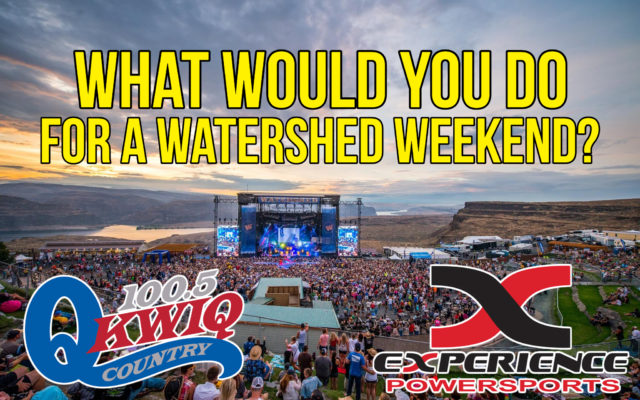 NO PURCHASE NECESSARY TO ENTER OR WIN.  A PURCHASE WILL NOT INCREASE YOUR CHANCES OF WINNING.

These contest-specific rules should be read in conjunction with Alpha Media’s General Contest Rules, which are applicable to all contests conducted by Alpha Media Holdings LLC and/or its subsidiaries (including licensee subsidiaries).

VIA INTERNET –Go to KWIQ.com and follow the links and instructions to enter and submit the required information, which may include your first and last name, address, telephone number, date of birth, and a valid email address, in the online entry form.  Internet entries will be deemed made by the authorized account holder of the email address submitted at the time of entry.  The authorized account holder is the natural person who is assigned to the email address by an internet access provider, online service provider or other organization that is responsible for assigning the email address or the domain associated with the submitted email address.  Multiple entrants are not permitted to share the same email address.  Entries submitted will not be acknowledged or returned.  Use of any device to automate entry is prohibited.  Proof of submission of an entry shall not be deemed proof of receipt by Station. The contest/sweepstakes administrator’s computer is the official time-keeping device for the Promotion.

Only one internet entry per person and one entry per email address are permitted.

Overall odds of winning dependent on number of entries received

Listeners will be asked what they would be willing to do (on camera) to win a Watershed Weekend. During the first two (2) weeks of the contest, they will submit their ideas via KWIQ.com. From these, three (3) finalists will be selected by a panel of judges at Alpha Media Wenatchee. These finalists will be selected based on which submissions the judges deem to be: the most entertaining to watch on video once completed; reasonably able to be completed in a forty-eight (48) hour time-frame; not malicious in nature; not dangerous to the listener entering.

Once the five finalists have been selected, they will be asked to perform their submissions and record them on video to send to KWIQ-FM. These videos will be posted at KWIQ.com during the final two (2) weeks of the contest for listeners to vote on. The listener with the highest number of votes will be named as the winner.

Winner need not be present or listening to win

There is no substitution, transfer, or cash equivalent for prizes, except that the Station may, at its sole discretion and to the extent permitted by law, substitute prizes of comparable value or cash.  The prizes are expressly limited to the item(s) listed above and do not include taxes, gratuities or any other expenses.  Other restrictions may apply.

Decisions of Station management with respect to the Promotion are final.

iii.         represent and warrant that: you are at least as old as the age of majority in your state; you have the full legal right, power and authority to grant to Alpha the license provided for herein; you own or control the complete exhibition and other rights to the Materials you submitted for the purposes contemplated in this license; you are either the parent (or legal guardian) of any minor featured in the Materials or have received the express consent of the parent (or legal guardian) for any such minor to appear in the Materials and to enter the minor’s likeness in the Materials in the contest; and neither the Materials nor the exercise of the rights granted herein shall infringe upon or violate the right of privacy or right of publicity of, or constitute a libel or slander against, or violate any common law or any other right of, any person or entity.