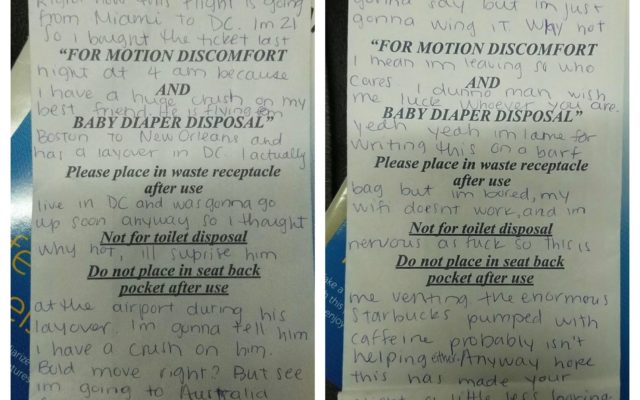 This is one of those rare situations where social media actually IS useful . . . because it just might let us all know how this story turned out.

A woman was cleaning an airplane last year and found a message written on a BARF BAG.

It was signed by a 21-year-old named Andrea.  And she said she’d just bought the flight last minute from Miami to D.C. to intercept her best friend while he had a layover there . . . so she could tell him she LOVES HIM.

And since she was going to Australia in four days for a semester abroad, it was her last chance.  Why write about her mission on a barf bag?  Quote, “my wifi doesn’t work . . . so this is me venting.”

So now, people on social media are trying to track down Andrea . . . to find out if she DID catch the guy between his flights to have her romantic comedy moment with him.

But so far, Andrea’s identity is still a mystery.