Predictions People Made About The Year 2020 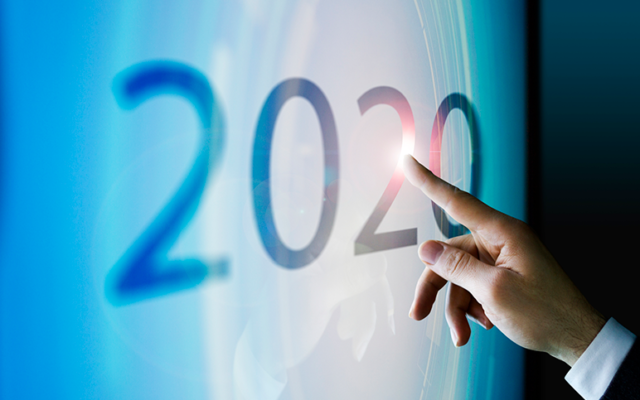 In one year it’ll be 2020. It’s the kind of year that just rolls off the tongue — and sounds very futuristic. Here are some past predictions made about the year 2020.

We’ll have ape chauffeurs. The second issue of The Futurist magazine, published in 1967, contained an exclusive report from the RAND Corporation, a global think tank with a track record that’s included contributing to the space program and the development of the Internet. This time, however, they may’ve been a little off the track. In a story titled “Intelligent Apes Become Chauffeurs,” they shared details from a RAND study indicating that, “by the year 2020 it may be possible to breed intelligent species of animals, such as apes, that will be capable of performing manual labor. During the 21st century, those houses that don’t have a robot in the broom closet could have a live-in ape to do the cleaning and gardening chores.” As for whether apes could be used for driving cars, the study concluded that “the use of well-trained apes as family chauffeurs might decrease the number of automobile accidents.”

We’ll finally make it to Mars. We’ve been dreaming of making it to Mars for as long as we’ve known the red planet existed. But it’s only recently that the venture has started to feel even remotely realistic. Back in 1997, Wired magazine picked the date 2020 as the year when “humans arrive on Mars.” Even NASA projects that the earliest we could get a human on the face of Mars is 2030, and that’s only if we’re really, really lucky.

We’ll live in flying houses. Arthur C. Clarke, an inventor, science writer, and futurist, believed that the boring houses of 1966 would be radically different by the time we reached 2020. The house of the future “would have no roots tying it to the ground,” he wrote. “Gone would be water pipes, drains, power lines; the autonomous home could therefore move, or be moved, to anywhere on earth at the owner’s whim.”

Mail will be sent via rocket. Mail delivered by a cruise missile, as insane as it sounds, was successfully attempted in 1959, when a Navy submarine sent 3,000 letters, all addressed to political figures like President Dwight D. Eisenhower, using only a rocket. The nuclear warhead was taken out and replaced with mail containers, and the missile was launched towards the Naval Auxiliary Air Station. The mail was successfully delivered, and the Postmaster General was so excited by the “historic significance” of mail delivery using rockets that he predicted it would become commonplace by the next century: “Mail will be delivered within hours from New York to California, to Britain, to India or Australia by guided missiles. We stand on the threshold of rocket mail.” Instead, we got email, where messages can be transmitted around the globe within seconds.

C, X, and Q won’t be part of the alphabet. If you’re curious about the future of language, maybe you don’t ask a railroad engineer. But that’s what the Ladies’ Home Journal did in 1900, asking renown engineer John Elfreth Watkins Jr. for his educated guesses about the 21st century. He had no love for what he considered extraneous letters, and so boldly predicted that by 2020, “There will be no C, X, or Q in our everyday alphabet. They will be abandoned because unnecessary.” Instead, Watson wrote, we’d be spelling mostly by sound and would only communicate with “condensed words expressing condensed ideas.” Thanks to text messages, we’re not far off.

Human feet will become just one big toe. So, what’s going to happen to our feet — or, more specifically, our toes — in a year-and-change? In a lecture to the Royal College of Surgeons of England in 1911, a surgeon by the name of Richard Clement Lucas made the following curious prediction: “Human beings in the future will become one-toed. The small toes are being used less and less as time goes on, while the great toe is developing in an astonishing manner.” In roughly one hundred years, Lucas predicted, our outer toes would gradually disappear and “man might become a one-toed race.”