Poland Once Gave America a Birthday Card That Was Signed By 5.5 Million Polish People 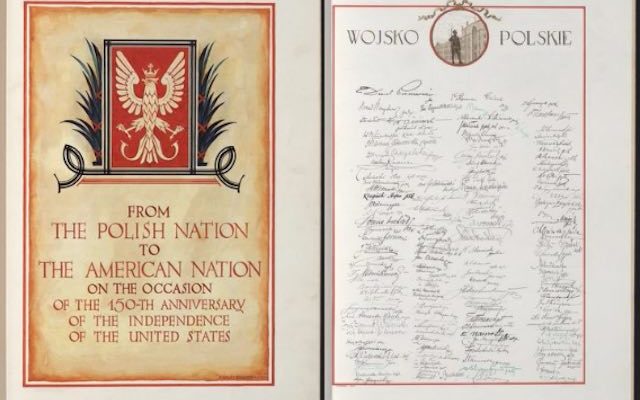 This birthday gift to the United States may have gone down in history as one of the sweetest gestures of international appreciation for the country’s independence.

Two years ago, the Library of Congress’s website published the entirety of a Polish birthday card that was given to the United States on the 150th anniversary of when America claimed independence.

And when we say entirety, we mean all 111 volumes of well wishes – including 5.5 million signatures from the Polish people.

The Polish Declarations of Admiration and Friendship, which also served as a thank you from the Polish people who were grateful for American aid during World War I, were presented to President Calvin Coolidge in 1926. The collective 30,000 pages are rich in color and history, with pressed flowers, drawings from famous Polish artists, and notes from religious, social, business, military, and educational institutions.

The signatures basically serve to represent about one sixth of the Polish population from that time. As the volumes took eight months to create, they were also delivered some time after the Fourth of July.

But they were appreciated all the same.

To summarize the message of the Declarations, the Polish committee in charge of the project wrote: “Noble Americans, your national holiday is sacred not for you alone. It finds a warm reverberation over the whole world.”

“We, the people of Poland, send to you, citizens of the great American union, fraternal greetings [and] . . . our deepest admiration . . . for the institutions which have been created by you.

“In them, Liberty, Equality and Justice have found their highest expression and have become the guiding stars for all modern democracies.”

“With eternal gratitude in our hearts,” the Poles declared, “we . . . desire . . . to wish your country and your nation all possible prosperity. . . . Long live the United States of America!”