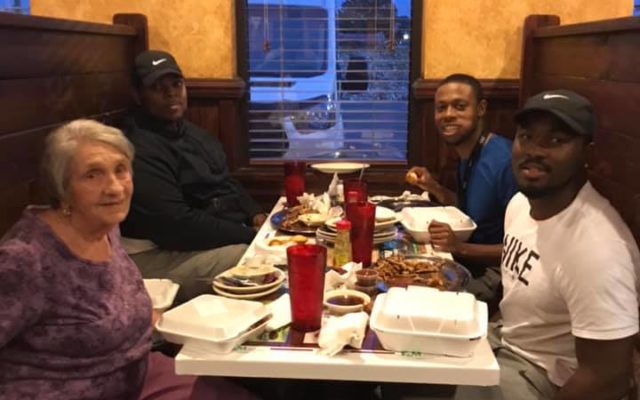 If you haven’t seen this photo yet, the story behind is it pretty great . . .

A guy named Jamario Howard was at a barbecue joint in Oxford, Alabama last week with two of his friends.  They all look like they’re in their 20s or early 30s.

And he noticed an elderly lady at another table, eating dinner by herself.  So he went over and asked if he could sit with her.

Her name is Eleanor.  She told him she was alone because her husband passed away.  And the next day would have been their 60th anniversary.

So at that point, Jamario invited her to come and sit at HIS table with his friends.  And she got all excited.

Now a photo of all four of them sitting together is making the rounds online.

Jamario says he just thought about how he’d hate it if he had to eat alone.  And he hopes it inspires more people to do something kind.  Adding, “You never know what [other people] are going through.”