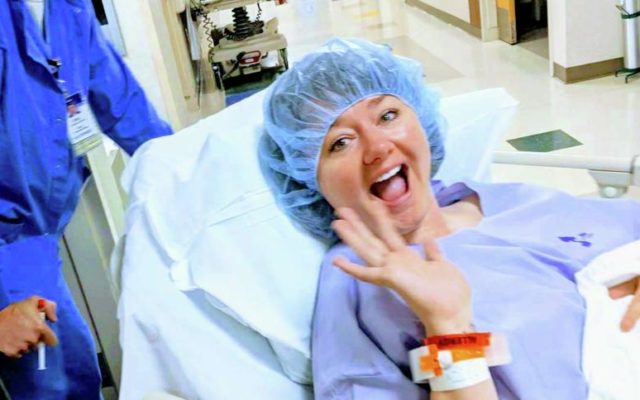 Kristin Day maintained extreme enthusiasm right up to the moment she went under the knife to donate a kidney to a friend.

A woman in northern Minnesota named Kristin Day was recently at a bar, and started talking to a guy who’d been going through dialysis, because his kidneys were damaged.

A lot of people on dialysis aren’t supposed to have alcohol.  So it’s not clear if he was drinking or not.  But they struck up a conversation.

And after knowing him for just two hours, she decided to give him one of HER kidneys.

She went through all the tests.  And he actually tried to talk her out of it at one point.  But she says it felt like there was a REASON they met that day, and she’d never felt like that before.

The surgery happened about six months later, and Kristin spent four days in the hospital recovering.  But she’s doing great now, and so is he.

She knows it was kind of crazy how it all went down, but says they were both just in the right place at the right time.  And she’s definitely happy she went through with it.