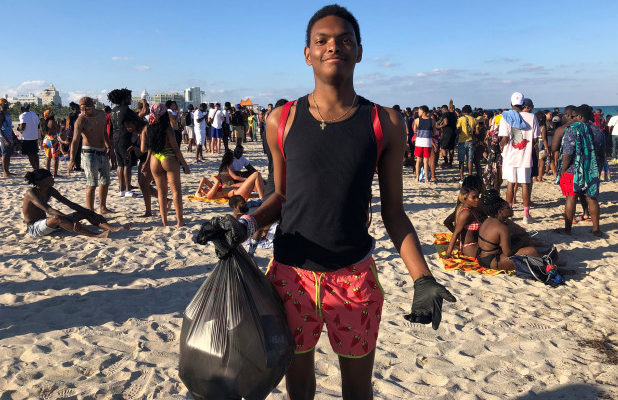 It’s good to know not ALL college kids spent their spring break snorting beer out of each other’s navels.  (And yes, snorting alcohol is a real thing.)

19-year-old Joshua Caraway is a freshman at the University of West Georgia.  And he went to Miami Beach with a bunch of friends for spring break this year.

Now photos of him are going viral, because he spent a good chunk of his trip cleaning up TRASH.

He walked along the beach with a trash bag and gloves on, and picked up garbage other people had left behind.

A cop saw what he was doing and walked up to say thank you.  Then a local news station posted photos on Facebook, and they blew up online.

Joshua says he tried to get his friends to help him, and they acted like he was nuts.  But he did it himself anyway, because he loves animals and the environment.  And he wanted to leave the beach looking better than when they got there..

Happening now: Meet Joshua from Atlanta (@boppay), he’s going through the Miami Beach crowds picking up trash. @MiamiBeachPD’s @PaulAcostaMBPD met with him to thank him for his efforts 👏🏼👏🏼 pic.twitter.com/3ypXQL7tHT