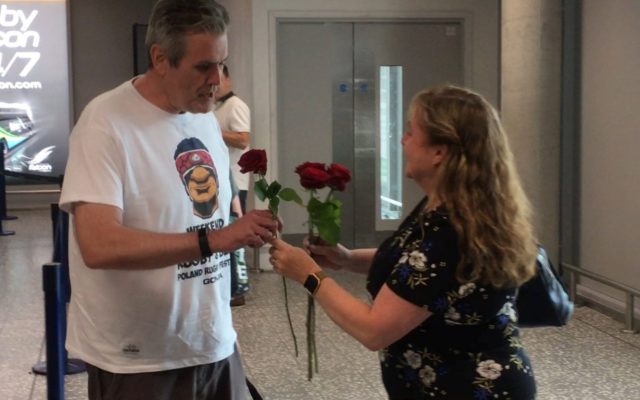 Huge gestures don’t always have to cost a fortune.  Like this guy, who COULD have just bought his wife flowers.  But he went the extra mile . . .

52-year-old Mark Raby plays on an amateur rugby team in England.  And they recently got into a tournament in Poland.  But it coincided with his 30th anniversary.  So he was planning to skip it, and spend the weekend with his wife Julie.

But then she told him it was okay.  He’d be getting back ON their anniversary.  So she’d just pick him up from the airport, and they’d go out for dinner or something.

But Mark knew it was a big day.  So he coordinated with the airport, and had 30 red roses delivered.  Then after they landed, each of his teammates walked out with a single rose . . . handed it to Julie . . . kissed her on the cheek . . . and walked off.

Mark was the last one to walk out with the 30th rose.  And she was wiping away tears, basically the entire time.

She says Mark’s always been big on romantic gestures.  But she thought this one was pretty special.  (Bristol Live)